The Pilgrim Trail is a route that takes in all the planets of significance to the Krath, in order of their apperance in Krath lore. Please take care when visiting planets, as some are known to be controlled by enemies of the Krath. 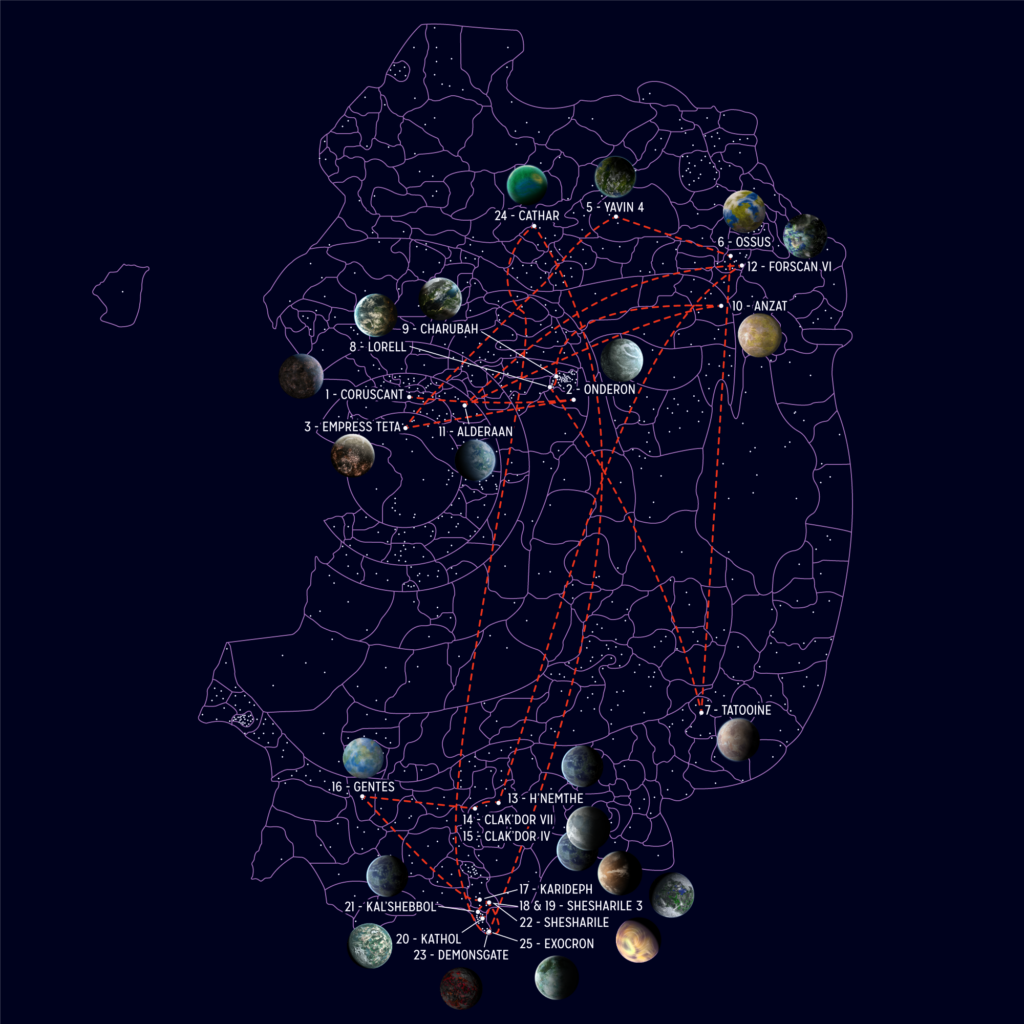 The Pilgrim Trail is a journey for those wishing to understand Krath more. It involves a series of locations that were important to the Krath at one stage or another that should be followed in order to get the best feel, and authenticity. Unfortunately, due to the old age of some of the records, parts of the Trail are missing. For now, just read and absorb what the significance for that location is, before travelling on to the next stop. In order to inform you of the risks that may be attatched to travelling to these locations, the controlling group is indicated, and coloured based on their aggressiveness towards the Krath.

It was here that Satal Keto and Aleema Keto discovered an ancient Sith spell book and stole it in an effort to unlock their secrets. However they could not read the ancient text and so headed to Onderon, spurred on by the information that dark side users were there.

The beginning of the rise of Krath, it was here that Satal Keto and Aleema Keto went to unlock the secrets of the Sith spell book they uncovered on Coruscant. There they met with the long dead Sith Lord Freedon Nadd who unlocked its power for them.

Here the new followers of Krath came into their birthright when Satal killed his own father and closest advisors in a carbonite mining station. There they took control of the entire system, and fended off a Republic/Jedi taskforce.

It was here that the Krath launched a massive attack on a gathering of over 10,000 Jedi. Using their Krath War Droids, and corrupted programming of the Jedi’s serving droids, many of the Jedi were wiped out. The Jedi, Ulic Qel-Droma, infiltrated the ranks of the Krath and became Aleema’s lover. Over a period of time, Aleema got jealous of her cousin Satal and though events Qel-Droma killed Satal.

The Sith Exar Kun joined up with the Keto’s in his search for other darkside users. Together they drew in prospective Jedis and turned them to the darkside, and sending them off to kill their masters.

With the Tetan fleets organised, a strike at Coruscant was performed. Betrayal by Aleema caused a series of events that led to Exar sending her to Ossus in the newly unearthed Sith warship – Naga Sadow’s flagship. Its secret weapon was able to destroy stars using the force of the user, and when Aleema used it to destroy Jedi ships in the system, the resulting chain reaction of supernovas from the stars caused the ship to be engulfed.

With the death of Exar on Yavin IV, the Krath fell from power and the public eye. However, in recent times the cult was reborn and first returned to power at Tatooine as the Order of Krath under command of Thraken Solo.

Successful boarding actions of the Order under Thraken, strengthening Krath’s military at the Antarian Rangers expense.

9. The Hapan Roots
Sector: Hapes Cluster
System: Charubah (142, 109)
Planet: Charubah (5, 9)
Controlled: Hapes Consortium
This system is closed by the local government. Krath citizens are not allowed to enter at this time.

Successful consolidation by Krath against intruders when the Hapes Consortium lost control over the planet for a short while. Lord Frezt Raleigh’s birth place.

Dark Jedi Asarya Katr lured many Krath into a trap and made them prisoner. Some became martyrs.

Where the Invisible Army heresy started which almost meant the end of the Order.

Rows of ancient Asylums mark this city, leftovers from an ancient pre-Krath Era where firm believers where often mistaken for insane or dysfunctional people and were locked away. It has been opened by the Krath as tribute and reminder of past mistakes.

The home of Mystiel Raleigh for the years he spent in the Minos Cluster. The temple in which he used to communicate with Krath still exists and has been opened for visitors.

The original Krath Palace in the Minos Cluster, it’s been a home to most prominent Krath in the second and third Era. Many relics can be found here.

An ancient command centre next to the most important starport of the planet. The remainders of Krath Lord Mystiel Raleigh can be found here as well as other relics of the Order.

The temples play an important role in the Shesharile diocese and

The religious centre of the Order of Krath. The city consists soley of temples, churches and chapels, with in the middle the colossal Grande Cathedral, the command centre and a huge conference building for conclaves.

After years of being a slum planet, with millions of sentients living in conditions that would appall the most degraded Gamorean, the planet was redeveloped into a world that took into consideration the natural beauty of the planet’s plains and deserts.